13 weeks ago I was about to do my first teleseminar ever. And I was scared to death! Because even though I’ve done thousands of recorded interviews (including video and audio), I had never done a live teleseminar before.

Like everybody, I experienced the fear of the unknown.

What would happen? What might go wrong? What if nobody showed up… or what if my guest didn’t understand my question? What if I just sounded nervous as heck?

Well, luckily my first guest was my friend David Garfinkel, and since I had interviewed him before, I was confident that he could deliver good content regardless of the situation. That was a good bet, and it worked out well.

Then right afterwards, I was SO happy with myself, so proud for facing the fear head on, feeling it clench my heart and doing it anyhow… that nothing could stop me ever again.

That’s the thing with most fears… they’re about False Evidence Appearing Real, and if we face them head on we realize how false it was.

Feel the Fear and Do It Anyhow… 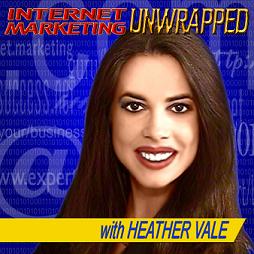 And that brings me to tonight, when I did my 13th episode of Internet Marketing Unwrapped. The season finale as opposed to the season opener… and boy, was the feeling going into this one different than the first!

The amazing feeling that nothing can stop me, nothing can slow me down, is going to stay with me for awhile here… and the relief of having a few weeks off from the weekly schedule before starting it all up again with Season 2 (love ya, IMU, but we all need a break sometimes!)

So take it from me… if you ever don’t want to try something even though you know in your heart it’s the right thing to do; if you feel fear of success or fear of failure… just do it.

If you’re afraid of failure, and you don’t do something because of that, you’ve failed already.

If you’re afraid of success, and you don’t do something because of that… well, that’s just silly. Come on, who doesn’t want greater success (however you define that)?

Keep Unwrapping Your Success… And Wrap Up the Fear!