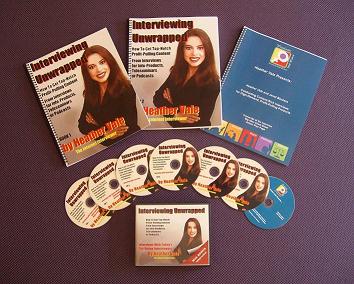 For the past week I’ve been giving away free training to help people learn how to do high-quality interviews, and then profit from them…

And today my ultimate profit-with-interviews home study resource, Interviewing Unwrapped, is available at a special price of $100 off!

The Interviewing Unwrapped foundational physical package (shown) consists of three manuals and 7 CDs with 11 interviews on them.

And the interviews, of course, are with interviewers! 😉

Book 2 and 3 feature transcripts from those interviews, and Book 1 includes everything I’ve learned from over 15 years of interviewing people; the good, the bad, and the ugly, so that you don’t have to go through the same mistakes, trial and error that I did.

But that’s not all!

There are three levels available to help people with what they most want to learn:

Each of them come with the physical foundational resource, and then digital membership areas that build on and enhance those essential skills.

The Show Host Pak goes more into the how-tos and technical aspects of creating content, and the Producer Profite Pak goes deeper into pitching, producing and profiting from that content.

Hey, I know, a lot of people are teaching you that it’s “easy” to go out and interview experts, so why do you have to learn how, right?

Well, I’ve listened to a few interviews lately where people did not learn how.

One was a pile of hypey conversational fluff, with no meat to the interview.  The interviewer completely missed asking the crucial questions to help the audience achieve what was promised on the salespage: to learn how to increase business with Twitter.

One sounded like the interviewer was reading a list of questions (he probably was, and I call that a questionnaire rather than an interview) and the interviewee sounded just as scripted with a bunch of prepared answers and a lot of “I’m glad you asked me that!” Gag!

Both of those had far more closed-ended “fact-finding” questions than anything thought-provoking, but a third interview I listened to was about 90% questions like that.  And hey, I’ve heard many “fact-finding missions” disguised as interviews in my time, not just these ones!

I know that might not sound so bad, because you want to find out facts when you listen to an interview… but these facts were uncompelling, non-impactful things like “yes”, “no”, “maybe”, “sometimes” and “not really”.

And that made the balance and flow of the conversation really skewed and hard to listen to, especially as the interviewer got more and more flustered. They were obviously nervous and couldn’t figure out what they were doing wrong, so they kept talking more and more to fill up the dead air.

Now here’s the other part of the equation:  interviews like that don’t sell as much as interviews that deliver good content; they don’t go viral and get word-of-mouth referrals; and when people do buy them, they get a lot more refunds.

Maybe I’m lucky, or maybe it’s just all those years of deeply analyzing the ups and downs of interviews that were done by the pros, but I can listen to any question in any interview and either tell why it’s a good question, or give some suggestions to make it better.

And I share all that in Interviewing Unwrapped, so that anyone can conduct quality interviews, as long as they want to learn how.

That’s right, I said anyone!

From the time I saw my first “questionnaire” on TV more than 15 years ago (someone else handed me a list of questions and told me to do the “interview”, which was really a “questionnaire”), I’ve been on a mission to share tips and techniques with other interviewers who want to produce top-notch content instead of… well, let’s be honest here… instead of crap.

If you want to join the ranks of those that are profiting from conducting good interviews and creating high-quality content, get Interviewing Unwrapped now before it’s gone.