Breakthroughs come in all kinds of unexpected ways.

This past weekend, for example, Barry and I experienced a breakthrough in our relationship that came just when we were taking a plunge down the roller coaster ride of life. We felt like we were going to keep racing further down… and instead we took a sharp turn upwards.

It’s inevitable that we experience ups and downs in life — after all, as we’re always saying, the Universe exists in complete balance.

Unfortunately, knowing that doesn’t really make the downs much easier to deal with, does it? But tapping in to your superhuman drive, which takes charge when you’re determined to get out of a dark ditch and shed some light on a situation, can.

Funny thing is, you can’t usually get out of that ditch by scrambling. It’s more effective to quiet those panicky emotions, take a step back, and look at the big picture — even as far as seeing your life’s purpose.

That’s essentially what Barry and I ended up doing, which led to the first amazingly inspiring breakthrough…

Now our son, Konan — who recently got over a week-long illness that had the already-picky toddler eating next to nothing — suddenly loves food more than he has since, as a baby, he would gobble down anything I put on a spoon.

The biggest surprise came yesterday morning, when he pointed out a plum on the counter. See, Barry’s been concerned about Konan’s aversion to fruit — he’ll eat bananas, fruit yogurt or smoothies, but turns away any other incarnation of nature’s sweets — even while I’ve been insisting that it’s pretty normal for a toddler.

But this was a chance for another breakthrough. 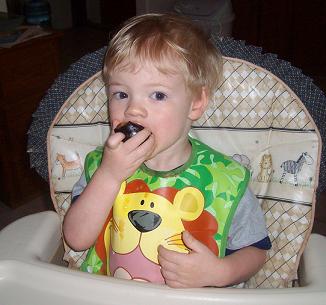 Holding Konan in one arm, I showed him how we wash fruit with the other, then took a bite of it.

Intrigued, though a little cautious, Konan followed suit… first a small taste, then gradually bigger bites, until he was munching happily away on it (I took a few pictures as proof, because I knew Barry would never believe it).

Konan isn’t motivated much by reward. At his age, just a few months shy of turning two, he doesn’t understand the concept of, “if you do this, we’ll give you that.”

But he is motivated by doing what his parents do. Leading by example doesn’t always work when it comes to food, but when his curiosity mixes with his prime purpose of being a big boy, magic happens.

Along the lines of these two examples, Barry dug up a fascinating 10-minute video that shows how people are motivated. I can’t do it justice here, except to say that it involves purpose. How that has translated into real-world studies will probably amaze you, though… and you have to watch the video to see what I mean.

Right below the video, you’ll discover a way to achieve your own breakthroughs… and it won’t cost you a thing except a bit of your time, which should be both enlightening and entertaining.

Watch, read, and get ready for a breakthrough here.