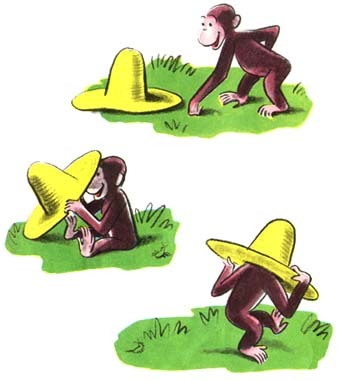 The Tooth Fairy brings coins, the Easter Bunny brings eggs, Santa Claus brings gifts… so who is it that brings little kids the inspiration to ask “Why?” no matter what their parents say to them?

Maybe it’s the Why Monkey… they’re pretty curious, especially that one named George.

I hope it’s not the Why Cat, because curiosity killed the cat.

Anyhow, I think it’s cool that our little guy now wants to know how and why things work. He’s taking after both his parents (after all, we met and were drawn to each other on several levels when we were both making a living asking other people questions).

“The important thing is not to stop questioning. Curiosity has its own reason for existing. One cannot help but be in awe when he contemplates the mysteries of eternity, of life, of the marvelous structure of reality. It is enough if one tries merely to comprehend a little of this mystery each day. Never lose a holy curiosity.”
— Albert Einstein

My only concern is that someday I’ll run out of answers to “Why?”

I guess he’ll keep me on my toes with improvising and being creative (because, after all, despite my sometimes annoying need to share trivial things, I really don’t know everything!) 😉

So far I’ve only had to resort to “Because I said so!” once or twice.

But seriously, kids deserve better than that.

Because they’re sweet and innocent.

Because they’re only trying to do what we should all do: learn, grow and develop.

Because that’s why we came into this world.

Because that’s our purpose in life.

Because I said so!