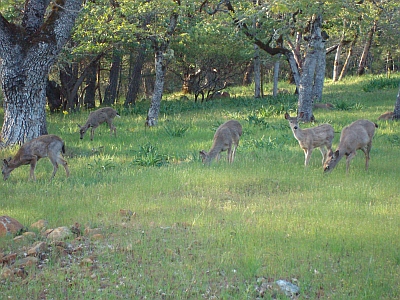 Saturday evening, Barry and I took an impromptu drive through Colonial Valley, a nearby little oasis of wildlife that we had never visited before, but had heard all about the beauty.

The first deer I saw, bounding along the grass towards the road we were driving on, prompted me to gasp in delight — which scared the heck out of Barry, who was driving.

Right beside him were three more deer, casually grazing beside the road. We drove by slowly, and I took a couple of pictures from the car.

Then we came across the herd pictured above — nine of them all together — and I had to get out of the car to get closer for this picture, with one of them looking right at me.

By the end of the drive we had seen 16 deer in total… all within about the span of an hour or so. Who can say they’ve gone out for a casual drive and seen 16 deer within an hour? I was pretty impressed by the whole thing.

In fact, when Barry said whoever saw the next deer would be treated to dinner, I manifested the 16th one almost immediately.  I looked around, then straight ahead, and said, “There it is… crossing the road up ahead.” And there it was.

But it wasn’t just about deer…

There was also a sheep in a pasture, who would probably be the loner at that party, and a few horses.

But let’s not forget our feathered friends.

We found a little animal reserve where a pair of Canada Geese were hanging out with their 10 or so fuzzy yellow goslings. You haven’t seen cute until you’ve seen baby geese running for the water!

We actually saw a family of about 20 babies in the park near our place about a week ago, so the 10 were a small group in comparison, but the bird watch didn’t end there. First there were some other big birds in cages in the same reserve… pheasants or grouses by the looks of them.

But then, right after one of our deer sightings, we had a wild turkey cross in front of our car. When we drove past slowly, he was about a foot outside the passenger window — posing just like he was on a bottle of bourbon! 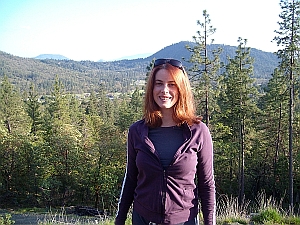 Every animal sighting — especially the “wild” ones — excited me and filled me with wonder.

So did standing on a mountain, with this beautifully breathtaking view behind me.

It made me think of lessons I’ve heard taught again and again, by teachers featured in Masters Of The Secret, Manifest Life and my upcoming Success Unwrapped book… which, like most lessons I learn, mean more to me when I formulate my own words around them:

It reminded me that we need to take time to connect with nature, and see the amazing and abundant qualities in the Universe around us.

For every 16 deer we come across in our journeys, grazing among 16 million blades of grass, there are 16 thousand things in our lives we can experience and appreciate. And there are lots more deer, lots more grass, and lots more things to appreciate where those came from.

And we can take that new vision back to our domesticated world, which will allow us to see an expanded version of that too.