The last appointment was at the Maternal Fetal Medicine Clinic in Medford (the biggest city around here) where they did some specialized Ultra-Screen tests for our baby, since I’m an “older” mom (meaning over 35).

Finally we got to see Peanut’s face, seen here in the ultrasound printout… a whole lot different than the small “bean” I saw a month ago!

We’re still not sure if it’s a boy or a girl, but bets are coming in on both sides.

It was quite an interesting experience though… besides the fact that we also saw the baby in 4-D (a picture is on the next page), we discovered that we have a larger-than-average baby — which wouldn’t be an issue except that it meant I couldn’t get the blood tests that were supposed to be part of the special screening.

Basically, they’re supposed to be able to do the ultrasound (which they did) and the blood tests (which they didn’t do) any time between 11 weeks and 13 weeks, 6 days.

I was at 13 weeks, 3 days (they certainly could have booked me in earlier, but I suppose the schedule was already full) but the measurements for the baby showed it to be over 14 weeks.

Okay, well 14 weeks is impossible, based on biological facts, and I told them that… but they still couldn’t do 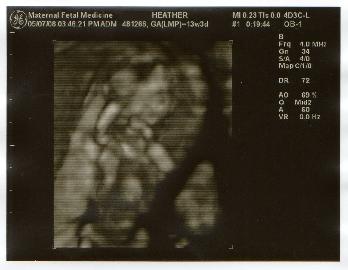 the tests (I guess this kid is destined to be either a basketball player like Dad was, or a model like Mom was, because he/she was several centimeters longer than the maximum length for that age).

Here’s the 4-D photo… you can see the right hand by the forehead and the left hand by the mouth.  I actually got it on DVD too, where it looks much clearer, but it’s only a TV DVD so I can’t pull the video off to post here.

Lesson Learned: The miracles of life never cease to amaze, but sometimes they just don’t go according to plan.  No worries, since there is usually a second option to accomplish the same thing… you just need to adapt, overcome and improvise, as Barry likes to say.

In this case, there’s a second similar test they can do in about a month instead.

So that was my second pregnancy visit for Doctor Week.  I also had my regular OB checkup on Monday.

Then on Tuesday it was acupuncture.  Turned out I hadn’t been completely cleared for the Vitamin B allergy we did last week, so he thought we had to do it again… but after checking with my body, he decided it was actually due to an emotional block, so we were able to clear it that way (and I didn’t have to avoid certain foods for 6 hours like I usually do).

He got a psychic message about when the emotional block originated (between 12 and 18 years old) and what it revolved around.  Then I focused on that feeling while he did the next step.

He used a process called BodyTalk rather than the acupuncture, which involved circling his hand around my head while I watched it, and simultaneously put my fingers on a few acupressure points on my face.  Then he did some tapping on my head and chest, which reminded me of EFT, but he said this was much more powerful.

And then he did finish up with a bit of acupuncture, but only 4 needles today (apparently when he checks with my body each time about what he can do, the answer is less and less needles).

Lesson Learned: Never assume physical problems are strictly from a physical source, when they could just as easily be associated with emotions.

For the past week, I’ve been experiencing severe bloating after meals, even just small snacks — partly due to the pregnancy, but much more than I should have been.  Since the emotional clearing, that problem has gone away, just like he said it would, and I’m back to the normal level of pregnancy-reduced digestive processes. 😉

And the other appointment I had during Doctor Week was going back to Clearly Lasik for an eye checkup, just before the Fetal Medicine Clinic.  The last time I was in, the doctor had been pretty sure I would have to get the one eye that had been healing slowly done again.

It took another month after that last appointment to see the improvement in my eyes, but I’m happy that now my vision is officially good (of course, I had already known that, but the confirmation is nice).

Lesson Learned: No matter how long it takes, don’t give up on your manifestations, because the results you’re looking for might be just around the corner.

So I’ve learned a lot about life and myself during this Doctor Week.

I wonder what next week will bring?