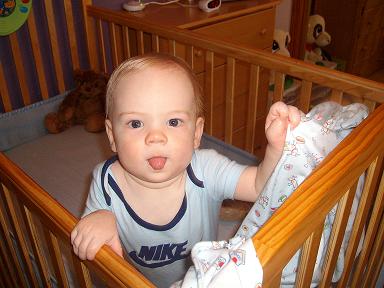 For months, Barry has been trying to get Konan to sleep in as little as possible to keep his body cool.

First, when he was a newborn, Barry didn’t want him swaddled, even when swaddling calmed Konan down and made him stop crying. Babies feel secure when their arms can’t flail around, but it looks like their freedom is being compromised, which always bothered Barry.

Then Konan graduated to sleep bags, which are like PJs without separate leg openings, or lightweight sleeping bags with arm holes.

There have been a few times when he slept just in a onesie or jumpsuit, but for the most part he sleeps better in a bag. Hey, I don’t like sleeping without covers either, even in the summer (especially when the AC is on)… and sleep bags are like covers that babies can’t suffocate themselves under!

But Barry keeps asking for Konan to nap without his bag, and today — another sweltering 100 degree afternoon — Konan decided Daddy was right.

He wiggled his way out of his bag, and threw it on the floor (along with his pacifier, toys, rattle and anything else that happened to be in his crib — throwing stuff overboard is his favorite new game!)

The picture shows Konan holding up the bag, shortly after he took it off.

So, at least for today, the message from Konan is: I’m a 9-month-old big boy now… and big boys don’t need bags!